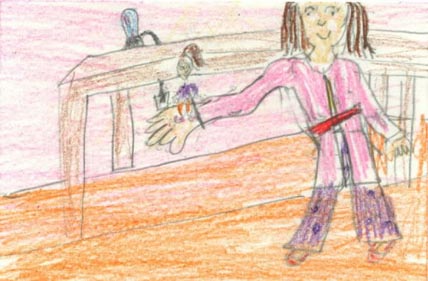 Later on, for Ali's second wish, Ali asks Little Genie if she would shrink her so that she could see what is going on in school from her backpack. Everyone had to go home because by accident Genie's magical powers caused a huge wave to come to the school. Since Ali was there too, she got drenched in the water. When Ali came home she was wet and had nothing dry to change into. For Ali's third wish Ali asked to be warm, and dry again. Little Genie called her Genie friend, Ray, and used his sunlamp to warm up Ali.

The next day Ali was going to stay home while Genie went to school. After a while, all the wishes were finished. Ali was her normal size, but Little Genie was her regular self again! Ali had to rush to school and find Little Genie. When Ali found Genie, recess was over.

There were characters I found interesting. I like little Genie because she is really cute. Also, all her magic powers are really cool. Little Genie is able to grant any wish for a temporary time. She is so small that she is no bigger than a marble notebook's length from the top when the notebook is closed.

I think the type of reader who would like this book is someone like me. If you are a girl who likes adventures this book would suit you.