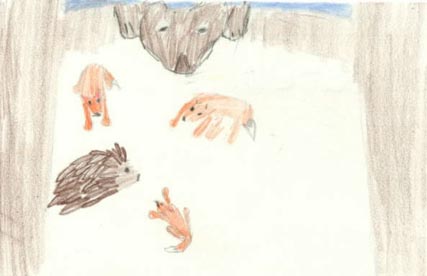 Ereth's Birthday mostly about an old porcupine who is having a bad birthday. He finds a mother fox that is dying in a human's trap. She asks Ereth, the old porcupine, to take care of her three kits. So Ereth becomes kind of like a father to them. Marty is rare because she is a fisher. Fishers are very rare for their fur. Marty is the only one left in her family. She wants to show the porcupines who the boss is. The kits' father is working so he can't watch over them.

I thought that Marty the Fisher was interesting because I never knew there was an animal called a fisher. Now I know that people kill fishers for their valuable fur to make expensive coats, rugs, and stuff like that.

Ereth changed his feelings by being grumpy and mad in the beginning; but in the end he becomes happy that he's with the kits. I like that change because I like it when people are happy and not sad or grumpy.

My favorite part was when there were so many traps. Ereth and the kits made huge snowballs to roll into the traps to set them off. In this way the foxes and Ereth would not be caught in the traps; the snowballs would be.

I would recommend this book because Ereth says funny words in the story. I think that second and third graders would like this book very much. An interesting thing about the character Ereth is that he was mad that he had to take care of the kits on his birthday. In the middle, Ereth was jealous and a little sad that the kits father was back and he couldn't take care of the kits anymore.