Red Pizzas For A Blue Count

Red Pizzas For A Blue Count 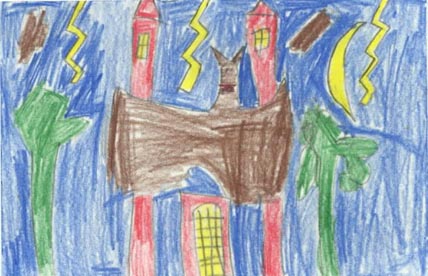 The book Red Pizza For A Blue Count is about four mice people going to a creepy castle to find Geronimo's cousin Trap Stilton. The characters are Geronimo Stilton, Thea Stilton, Benjamin Stilton, and Trap Stilton. They are a family. The castle they go in is owned by count Vlad Von Ratoff. They go to the castle to get Trap and leave.

My favorite part was when they went into the castle. I liked that because I like castles. While they are at the castle, the King turns them into slaves. Then they got his cousin and left without the King knowing.

I like the characters because they are funny. When they were going to the castle this man came up to them and he had garlic all over him. He smelled really bad! Also, while they were in the castle, Trap opened a can of tomato sauce and it went all over him.

I would recommend this book to anyone that likes rats, castles, and a lot of garlic. If you like vampires, you will love this book also. I liked it so I would think that most third grade boys would also like it. Try it.