Tommy Trouble and the Magic Marble

Tommy Trouble and the Magic Marble 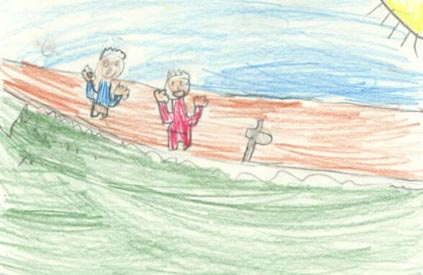 The story is mostly about a boy Tommy that likes to collect stuff like rocks, crystals, marbles, fossils, birthday cards, and even band aids. His marble collection is his favorite. One day the meanest kid on the block offers to sell Tommy a magical marble for only ten dollars. Tommy was ready to make a deal. Tommy knows he can make up a perfect plan to earn the money if only his little brother would stop getting in his way. Tommy plans to set up a lemonade stand in hopes of earning enough money. Read the story to find out if he is successful.

A lesson I learned was that you shouldn't bet on things that you are not one hundred percent sure about. I learned this because in the story Tommy tried to buy a marble, but he didn't have enough money.

The character that reminded me of someone that I know was the meanest kid on the block. He reminded me of my brother because he always wants to sell me stuff for ten dollars, but I don't do it.

The story reminds me of when my brother tried to trade one of his bad baseball cards for one of my good ones. He tried to trick me because mine was more valuable than his. He thought I would go for it, but I knew what he was doing, and I didn't trade.

My favorite part was when Tommy and his brother got along at the end because it was nice and in the beginning they hated each other.

I would recommend this story to people that like to collect stuff because in the story there are a lot of things that people can collect that are in this story.