The Littles And The SurpriseThanksgiving Guests

The Littles And The SurpriseThanksgiving Guests 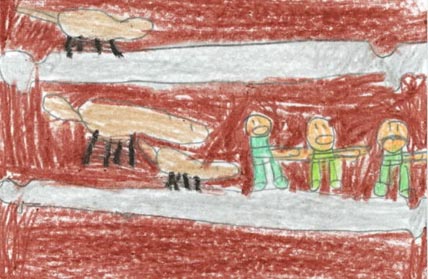 The Littles and the Surprise Thanksgiving Guests is a super book. The Littles have a problem the mice are coming to eat them! The Specks who are smaller than the Littles are also in danger. They went on a search to find out how the mice were getting in. They saw a window that was broken. So they fixed it, but they weren't sure if the mice did that. A week later, the Specks came. The Specks had an idea to avoid the rats. They found a ladder and a mini trampoline. Then they found an old cage. They set all of the equipment to the right places. The Littles and the Specks worked very hard. First, they climbed up the ladder. Next, they jumped on the mini trampoline. Then they jumped in the cage. Last, they trapped the mice in the cage. The Littlest and The Specks found out their plan didn't work. They knew there was a dog that hated mice, but they were afraid they would get eaten. The Specks had a pet skunk, so they told the skunk to get the dog. He got the dog, but he didn't know how to get back. A brave little got the skunk. He scared all the mice away.

The Littles and the Surprise Thanksgiving Guests is a super book to read! First, my favorite character is Uncle Nick. He is very active just like me. Also, he is very brave when he captures mice without hesitation. I like his solider costume, it is very cool. Second, the colors of my book's illustrations are in black and white. They are drawn very well and some are extremely funny. The pictures help me imagine the character and the places better because I have to imagine the actual colors Third, I have read another book by this author. It was called The Littles I liked it as much as this book. They were both very interesting and written very well.

I would recommend this book to people who like fiction. The actual events could not happen in real life but it was fun reading about something so silly.