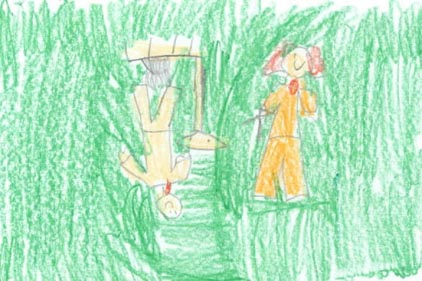 Sideway Stories from Wayside School by Louis Sachar is a comical book! Wayside School is not your typical normal school and many crazy things happen there. First, Mrs.Gorf turned everyone into apples. The whole class then ate their teacher. Next, the new teacher Mrs. Jewls thought the students were monkeys but they really weren't. Then a student named Sharie fell out of a thirty story high building. Later, Dana turned all of her mosquito bites into numbers. Soon after Ron could not read correctly so Mrs. Jewels had to turn him upside down. Meanwhile, Joe had curly hair and did not know how much he had so he started counting. Near the end of the book Jason got stuck to his chair by Joy's gum. The three Eric's lifted him up so Mrs. Jewels can cut his pants off. Last, Jenny came to school on a motor cycle on Saturday. Will Mrs. Jewels ever have a normal class?

This book made knocked my socks off. It had funny illustrations. I liked the illustration when Jason got stuck to his chair by Joy's gum and then Mrs. Jewels had to cut his pants off. My favorite part was when Terrence was at recess. Every time he got the ball he kicked the ball over the fence. At the end of the chapter the class and Louise the yard teacher, kicked the Terrence over the fence! My second favorite part was when Mrs. Jewels thought all the students were monkeys. My favorite characters are the three Eric's because their last names are Eric Fry, Eric Bacon, and Eric Ovens. All of their names had something to do with cooking. I liked Maurecia because she brought in ice cream everyday and I found that to be interesting. Sideway Stories from Wayside School is comical because of the hysterical pictures, the silly character's names, and the silly parts.

I recommend this book to people who like comedy .I think people should read my book because the illustrations will crack you up .Also, because the story is so amusing that it will keep you entertained for the whole time you are reading the book. I think you should go out and get this book. because you won't be able to put it down!