Dr.Suess's How the Grinch Stole Christmas

Dr.Suess's How the Grinch Stole Christmas 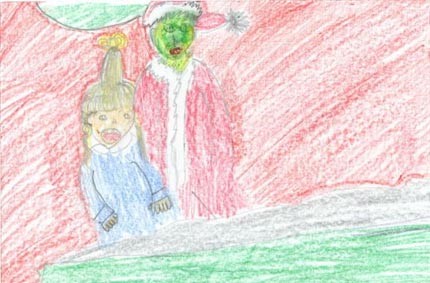 Dr. Seuss' How the Grinch Stole Christmas by Jeffery Price and Peter S. Seaman is an amusing book. The Whos' were getting ready for Christmas. The Grinch just had to come up with an idea to ruin Christmas. He couldn't stand the happiness around him! While the Whos' were preparing for Christmas, they had to pick the Holiday Cheer Master. Cindy chose the Grinch and got other people to do the same, so he got elected. When he got back home, he came up with an idea, and followed it. He stole everything that had to do with Christmas, even all the decorations in every one's house! Will Christmas be ruined ? Will the Grinch stay a big, green meanie?

Dr. Seuss' How the Grinch Stole Christmas is an exciting book! The book had some exciting characters in it, such as Cindy Lou, Mayor May Who, and the Grinch .This book also had parts that made me laugh like when the Grinch got a sweater five sizes to small. Then the Grinch fainted so his dog licked his mouth. I loved the illustrations especially the one with Cindy Lou kissing the Grinch, the one with Grinch wearing his sweater, and the picture of the Grinch as a toddler. I just couldn't put the book down!

I would like to recommend this book to anyone who likes to laugh a lot. One part that is really funny is when Cindy's mom went out to find all of the lights she could for outside the house, including the refrigerator lights! There was no power in the house; the power was OUTSIDE the house! You will really crack up when you read this part! Another funny part was when the Grinch got his sweater, you know, the one that was five sizes too small? The pictures were really funny , too. Rose and Clarenella , (the Grinches aunts) were sitting on their steps, in the front of their house wearing ponchos made of fruit slices, candy, and home made cookies! I say if you like to laugh hysterically, read this book!