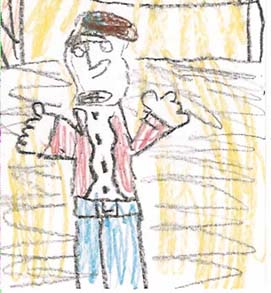 The Magic Tree House: Night of the Ninja, by Mary Pope Osborn, has five main characters Anna, Jack and the three ninjas. The tree house has magical powers. Anna and Jack have to take a book and open it. When the book is opened it can take them to a different place. Anna and Jack have to find this girl, Mary, she is trapped in a different time. It is up to them to find a book about ninjas.

In the middle, Anna and Jack went through the woods, up in a cave. There was a girl ninja. She brought them outside and pointed east instructing them to travel in that direction.

In the end, Anna put on her hood to look like a ninja. Then Jack did it too. Anna said and Jack start their journey. Do you think they will ever come back? Read the book to find out!

I like my story because it is a book that has magic and adventure. It makes you feel like you are in a whole new world. You do not know what comes up next. My favorite part was when Jack and Anna jumped into the book. It is my favorite part because it is exciting. I liked the character Jack, because he is like me. He is like me because he is brave, smart, and nice. It makes me feel like a hero, because they never give up.