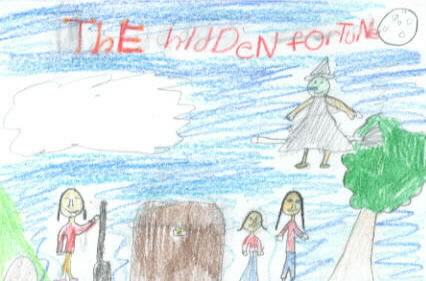 Ophelia and her six sisters receive a letter left behind by an old man who has passed away, but in order to inherit it, they have to solve four very challenging riddles. The first riddle was not the easiest of them all. It was almost the hardest one you would ever solve, but after a lot of research they finally found out the first riddle. "The witch!" yes, there was an old lady who was nicknamed "The Witch," but they found out that she was a very nice lady and it was just a rumor. In fact, she showed photos of when she was younger at the town and the town looked beautiful. The photos made the three friends think - how can they make the town beautiful again. The Witch (or her real name Mrs. Sparrow) gave them the next clue. Next they solved the second, third, and finally the fourth clue. Since they solved the fourth clue first, they are now rich. Where will they spend all of their money?

My favorite part was when the three friends, Ophelia, Emma, and Juliet, go to the witch's house. I liked that part because they were so scared of going there and it was just a rumor. Also, I liked that part because it was funny when Ophelia thought the cookie Mrs. Sparrow gave her was poisoned because she thought she was mean, but she was really nice. Third, it made me picture in my mind a mean old lady when they first entered the house, but after they left, it made me picture a kind lady. This part of the book is the best part ever!