Horrible Harry and the Mud Gremlins

Horrible Harry and the Mud Gremlins 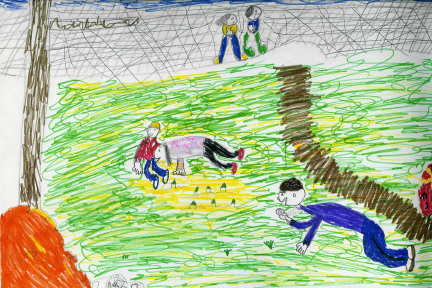 Harry is a trouble maker at his school, especially on the playground. Harry created a fib in the book. His fib is that Mud Gremlins made mud on his class' moon rug. Harry and his friends were climbing under a fence and got their shoes muddy. Then, they walked on the moon rug with muddy feet. They didn't want to get in trouble with the teacher so they made up a fib. The fib is that Mud Gremlins made the moon rug dirty.

I liked the illustrations but I would like them even better if they would add color to them. I liked them because some of the pictures had Harry and some of his friends playing together. I really liked the picture when Harry was telling the fib to the teacher.

The book reminds me of my little brother. He fibs a lot. When he hurts someone he says it is someone else's fault. He has to go to his room when he tells fibs and Harry had to do chores in the classroom when he told his fib.

A third grader would like this book because this book is their level. It has some hard words but the teacher can help read some of the words.

I would recommend this book as a good book because you wonder what's going to happen next.

Justin V.
is a student in
Mrs. Anderson's Class