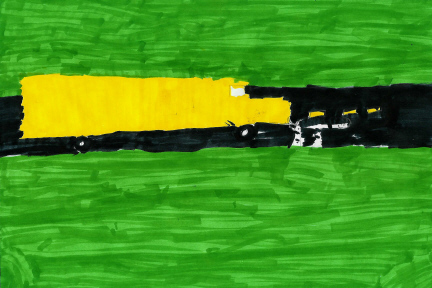 This story is about a boy named Jason that went on a bus ride and the bus goes through town. The dog got in the way of the bus and it did not move. Everybody on the bus tried to move the dog but it would not move. Jason got out of the bus and patted the dog on the head and the dog moved.

My favorite part was when the dog didn't move and when Jason patted the dog on the head and it moved. It was my favorite part because the dog wagged its tail and moved.

This story reminded me about when five deer crossed the road in front of our truck. The fifth deer came and we didn't know it was coming and we ran into it. We stopped and we got out and the deer was still moving and we had to move it out of our way.

I would recommend this book because people on the bus worked together to solve a silly problem. I think that kindergarten students would enjoy this book. I think they would like the pictures and the story.