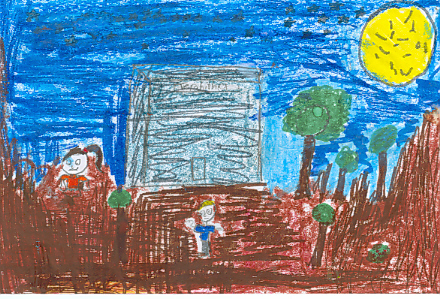 This book is about a boy named Jesse. He's known as the fastest kid in the 5th-grade. At Jesse's school, they have races. He met a girl named Lelsie. She is a fast runner too. They become very good friends. Jesse didn't have any close friends before he met her. One day, they thought of building a place called Terabithia. It was a very special place, it was a secret that was all their own. They spent a lot of time there. One day only Jesse showed up. What happened to Leslie? Read this book to find out.

I think this is a good book because it has surprising parts. I like the part when they build Terabithia. It reminds me of when my dad and I built a shack that just my brother and I could play in. That shack was just our very own. I found the main character interesting because he's a hard worker. He works hard at the farm while his sisters just play around and go shopping, he does well in school, and he does really fantastic art. I like him because of that.

I recommend this book to people who like sad stories about good friendships. Jesse and Leslie had a friendship that would last forever, no matter what. Jesse will always remember Leslie.