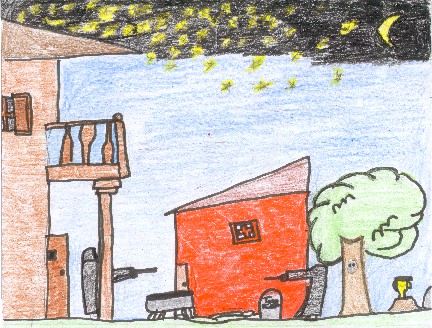 Harry Potter and the Goblet of Fire is an amazing book. A boy, Harry Potter, has great adventures at his school, Hogwarts School of Witchcraft and Wizardry, with his friends, Ron Weasley and Hermione Granger. There are lots of funny paragraphs like when Harry is going to get picked up by some of the Weasley's, Ron, Fred, George, and Mr. Weasley. Dudley runs around the room holding his behind because the last time he met a full-grown wizard, he'd grown a pig tail. Later in the year Harry was framed by a deatheater, Barty Crouch, who had put Harry's name in a goblet that would choose students from three different schools. Harry was put in as a fourth school and was enterd in a tournament called the Triwizard Tournament. There were three tasks. The first was a task where you have to get a golden egg from a dragon without weapons except your wand. Harry had a spell that would help him. Do you know what it was? You have to read the book to find out the rest of the book. I think you would find it pretty sad at the end of the Triwizard Tournament, but I can't tell you what happens next.

I think that no one would want to miss all the adventures in this book. J.K. Rowling wrote in a similar way like the first story because Harry fights Lord Voldemort. Harry or Lord Voldemort seem to get away before they defeat each other. Harry Potter is my favorite character in the story because he is the main one that fights. In a way, I am like Harry Potter because we are both determined.