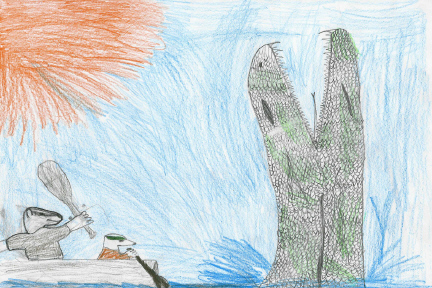 This book is a good book because it's very action-packed and suspenseful. It is about two adventures by young animals, a badger name Mara and a hare named Pikkle. The other young animals are a squirrel called Samkin, and a mole called Arula.

This book is about Mara, Pikkle, Samkin, and Arula trying to find adventures, but getting a lot more than they hoped for. The problem is when Ferahgo the Assassin and his army plan to attack Salamandastron and Mara leaves with Pikkle. They get captured by toads and nearly eaten by the Deepcoiler, a legendary lake monster.

Samkin and Arula start off with two evil vermin killing a friend with arrows, but Samking got accused. Samkin and Arula go after the vermin and find one vermin dead from a terrible sickness that soon many creatures from Samkin's home will die from. The vermin stole a sword that was extremely important to Samkin. That was why he went after him.

I like this book because the author wrote an incredible amount of details. One example is when Mara sees the Deepcoiler. He explains it as being huge, thick, green, gray, and covered with waterweeds, with rippling fins propelling it easily through the water.

My favorite part was when Mara meets the white "ghost" badger. They meet him when Pikkle is eating and he keeps getting shot with seeds by a squirrel. They chased the squirrel and the white badger.

I suggest this book to people who like action and suspense. I recommend this book because it keeps you entertained and interested.