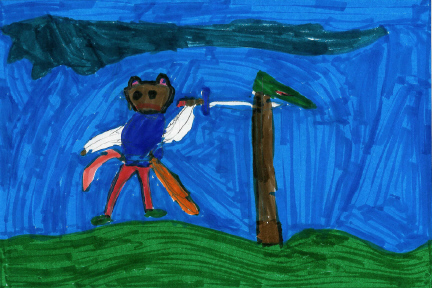 Martin the Warrior is a book about a mouse who has been a slave most of his life. His name is Martin. The place he is enslaved is called Marshank. Marshank is ruled by Badrang the Tyrant. This book connects to all the other Redwall books except Lord Brocktree.

The main ideas in this book are first that Martin escapes from Marshank and second, that Martin gathers an army to defeat Badrang's evil forces so that the land can live in peace. Read this book to find out what happens.

The unique thing about this book is that it connects with all the other books (except Lord Brocktree) because Martin the Warrior is worshipped by the animals that live in Redwall Abbey because he helped free the land and built the abbey.

I recommend this book for people who like action, suspense, happiness, anger and sadness. I think readers in third to sixth grade would like this book.

Brendan B.
is a student in
Mrs. Christy's 2nd/3rd Grade Class