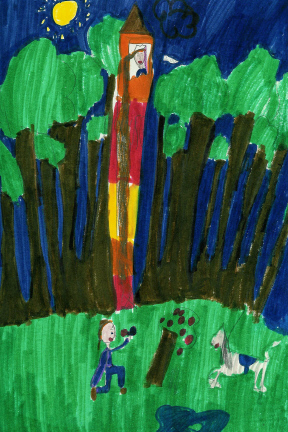 The story is about a girl named Rapunzel. She is named after a plant. He dad had to steal some of the plant so his wife would not die. The sorceress is who owned the plant. She found out and got mad. The sorceress said he could have as much of the plant as he wanted if she could have the child. When Rapunzel got older the sorceress put her in a tower. There was no door but Rapunzel's hair was long enough to touch the ground that is below the tower. One day a prince heard Rapunzel singing. He climbed up Rapunzel's hair. One day the sorceress found out that he was meeting her and the sorceress got mad. She cut her hair and made Rapunzel go far away. When the prince came he tried to climb up the hair but he fell and was blind. One day he found Rapunzel and they lived happily ever after.

I thought it was a good book because it was nice, it was like any other fairy tale. It was nice because in the end the prince and Rapunzel found each other. In other fairy tales the ending is usually nice too.

I liked when Rapunzel was singing to the birds in the tower. I liked this because she sings nice and the birds liked it. When I sing to birds they fly away from and I wish they would stay like in the story.

I liked Rapunzel because she was nice and pretty. She had long red hair and I really like long hair. She was kind because in the book she helped the birds when they were sick. She took care of the birds until they were better.