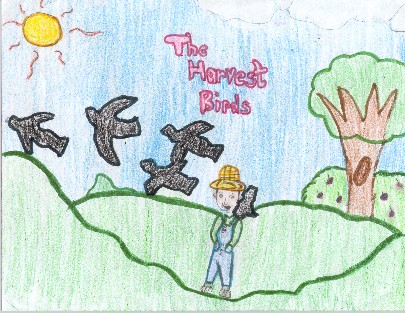 The Harvest Birds is a book about a man named Juan Zanate. He wanted the land his father had before he died. He received no land when his father died however. He wanted the land so bad that he begged for it. Everybody thought he could not grow the land so nobody gave it to him. If you want to figure out the rest of the story, you can read The Harvest Birds.

My favorite part of The Harvest Birds is when Juan gets the land from his friend and all his plants grow well because he still believed in himself . This book reminds me of a friend that never gives up when things are tough for her. I think this book is for someone that does not believe in him or herself. I felt that this was a great book because it made me wonder why he never gave up on himself. The interesting part of this book is how he never gives up and perserveres.

I think the audience who would like this book is a group of kids that don?t believe in themselves. I recommend this book for boys or girls of any age.

Shelby A.
is a student in
Mrs. Forney's 5th Grade Class