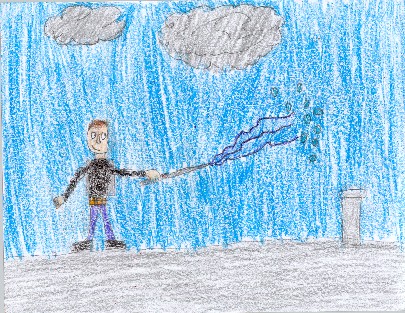 A fourteen- year- old orphan named Cosmo Hill is living in Clarissa Frayne Institute. There they test chemicals on other orphans and him. One day Cosmo and his friend Ziplock escape from a truck they were in. They nearly got caught, but Ziplock jumped off the building and onto an electrical generator and got electrocuted! Two blue creatures, or parasites, landed on them. Then a group of two boys and a girl jump off a building and come to the rescue. They blast the parasites and take Cosmo with them. Deciding that there was nothing left for him he joins the team. Later he finds out that he is one out of very few who can see the parasites. If you want to hear the rest read the book.

Cosmo changed from a no-sponsor orphan to a resourceful Supernturalist. I felt hooked as I read the book and it made me think about what it would be like in the future. I really like the book, because it is awesome, and like futuristic books. It is like other Eoin Colfer books because it is an adventure.

I would recommend this book because it is an extraordinary adventure with tons of action. People with a ravenous hunger for adventure and action would love this futuristic book. The fact that Cosmo goes through so much change and the fact that it has a lot of action would make readers really want to read this praise-worthy book.