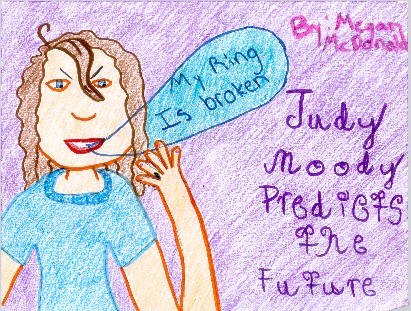 Judy Moody eats seven bowls of cereal to get to the prize. The prize is a mood ring. She puts it on, and it turns black. Black meant impossible and grouchy. Judy throws away the ring and said that it was broken. Her brother Stink gets it out of the trash and puts it on. It turned green. Green meant jealous and envious. It was better than black. Judy tries to get the ring back, but Stink won?t give it back. So Judy tricks him to give her the ring back. Will Stink ever give her the ring back? Read Judy Moody to find out.

It is a marvelous book, and I loved it because it is funny and terrifically good. My favorite part is when Judy does the big trick to get Stink to give her back the ring, and Stink does give her the ring back. I like it because it is a genius plan, and Stink falls for it. Yes, I did find some interesting characters. I liked Judy, Rocky, Mouse, Jessica, and Ms. Tater because they are all funny and interesting. This book reminds me of the t.v. show That?s So Raven because they are both about predicting the future.

Yes, I recommend this book for grades two and up. Probably the kind of readers or audience that like comedy and a little bit of action would like this book. The part where Judy and Stink are out in the back and Judy says that their old frog that ran away is under their cat, Mouse?s, water dish and Stinks thinks that he really is.