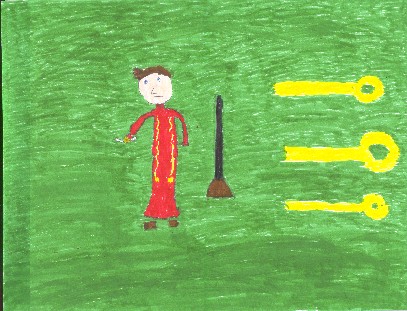 Harry Potter is back at Hogwarts for his fourth year, but before that some strange things happen at the Quidditch World Cup. The deatheaters come and torture the muggle guards. Then the dark mark was cast, and Barty Crouch's house elf was found at the scene of the crime. At Hogwarts, Harry is entered in the Triwizard Tournament, where he has to complete three tasks. The first task was seizing a golden egg from a Hungarian Horntail. The second task was rescuing Ron from the merpeople. The third task was a maze. The first to touch the cup would get full marks. Harry and Cedric tied, but the cup was a portkey. The instant they touched it it sent them to where Voldermort was being reborn. What happens to Cedric and Harry? You'll have to read this book to find out.

I think Mad-Eye Moody is the most interesting character, because he isn't an ordinary person. He adds excitement to the book. This is the best book I've ever read. It makes me never want to put down the book. My favorite part was when Harry and Cedric got teleported to Voldermort, because it gets so exciting and suspenseful. You always want to know what's going to happen next. The other books in this series aren't nearly as worthwhile as this one.

I'd recommend this book for grades fourth through sixth. I'd recommend it fop people who like exciting stories.