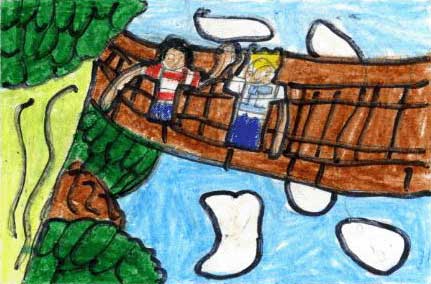 Wendell and Floyd were always late for school. They made up the worst excuses and there teacher never believed them. One day they were late and the teacher told them if it happened again they were going straight to the principal's office. So the next day Floyd came to Wendell's house and said he knew a shortcut through the forest. Maybe today they could get there on time. On the way they saw lot of animals like snakes, parrots, fishes and alligators. They went across a really high bridge and by the time they got across Floyd forgot where the trail was. This was going to be hard to explain to the teacher. Wendell climbed a tree to look around. They swung on vines and fell in a big puddle of mud. Off in the distance they thought they heard the school bell ring. They run towards the bell and they can hear their teacher say, they just made it. But, how did they get so dirty? The two boys suggested that she not even ask. They didn't think she would believe them. It was a while before the boys were late for school.

I think most boys and girls six years and older could read this book on their own. I think anyone five and under would enjoy having this book read to them.