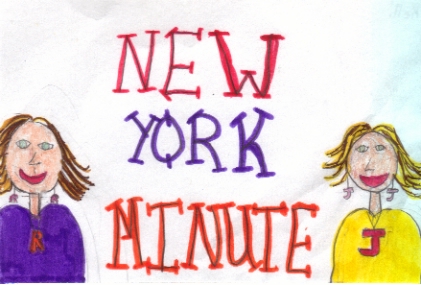 Do you know what can happen in a New York Minute? In this story two sisters find out. They like a lot of different things. Roxy likes to skip school, and Jane likes to go to school. Roxy likes dogs and playing in a band, but Jane doesn't. In this story Roxy skips school. Officer Lomax chases her all around town. Officer Lomax likes to catch kids that skip school, and make them go back. That is why he is after Roxy. He has been after her for years. Roxy skipped school because she wanted to do other stuff. Jane wasn't skipping school. She had a McGill Fellowship speech, to try to win a scholarship. When they were traveling around New York they had to face a lot of challenges. If you want to find out what they had to face and if Jane got the scholarship read the book.

My favorite characters were Jane and Roxy. I liked them because I liked how they fought through some of the challenges. I thought it was cool. I did because usually in their books they solve mysteries, but in this book they didn't. Instead of solving mysteries they had to fight a lot of people to get where they were going.

Kelli B
is a student in
Sr. Janet's 4th Grade Class