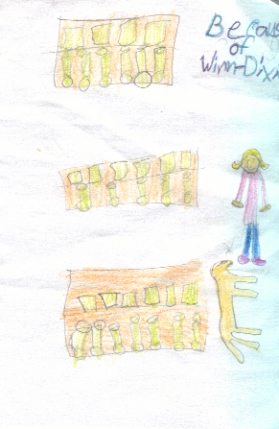 India Opal Buloni has only one parent because her mom moved away and didn't tell India and her father where she was going. Her father is a preacher and never really has time to go anywhere. Everybody really calls India, Opal. She was named India because her father was in a missionary in India. One summer when Opal's dad sent her to the grocery store to get some food, a dog came in the store. Now the storekeeper was mad because there's a rule that pets aren't supposed to be in there. Now Opal loved dogs. So of course Opal said the dog was hers. She named it Winn-Dixie because that was the name of the store. Opal got the food she needed and went to the trailer park where she lived. This dog was so skinny you could see her bones. She smelled. She didn't have an owner. Opal showed her dad Winn-Dixie. He said they could keep Winn-Dixie. Opal gave Winn-Dixie a bath. She gave her some food too. Winn-Dixie couldn't stand to be left alone. He had a pathological fear of thunder storms. He did a lot of weird stuff. Opal and Winn-Dixie made two friends at first but then she made more. If you want to find out more read the book.

I recommend this book because it's hilarious, Winn-Dixie doesn't act like any ordinary dog. Everybody that meets Winn-Dixie loves him. He helps Opal meet new friends in a new place. You would like this book if you like dogs and funny books.

Maty B
is a student in
Sr. Janet's 4th Grade Class