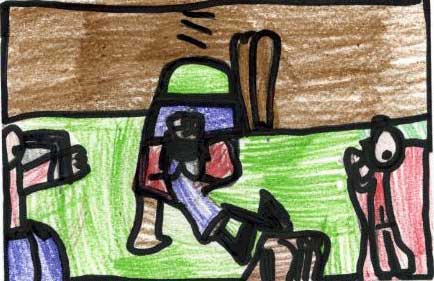 An old farm dog felt unwanted by his owner a little boy named Orvie and ran away into the woods. His name was Scamp. He came across a pond and an old house. In the house their lived a witch. Seeing that Scamp was sad she the witch turned him into a Wingdingdilly. Scamp sure looked different. He had the head of a rhino, feet like an elephant, antlers like a deer, strips like a zebra and a camels hump. Scamp was so scary looking he even scared himself when he looked in the pond. He hid in the woods until a man named C.J. Pringle captured him and put him on a platform where people could come and look at him in Pringle's Palace. Scamp was miserable. Meanwhile the witch returned from vacation as saw that the Wingdingdilly had ruined her flowers so she cast a spell on him to turn him into a dog. Scamp hopped on a train and went home to the little boy who was happy to see him. Scamp was happy too.

I really liked the pictures in this story they almost looked read but that can't be because there is no such thing as a wingdingdilly. I also like this story because it is really funny and I learned an important lesson that we should be happy with who we are.

I think first and second graders would find this story fun and easy to read. This might be a good story to read during Wacky Wednesday week in kindergarten because a Wingdingdilly sure is wacky.