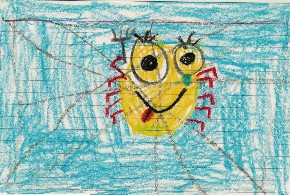 The Roly Poly spider spun a sticky web in a shape of a house. She wanted to catch insects for food because she was hungry. She became friends with the insects first. The spider would say you look like lunch to me and then ate the insects. She was so hungry she ate all of the bugs. She even wanted a bedtime snack at the end.

Others should read this story because it is funny and a nice book.