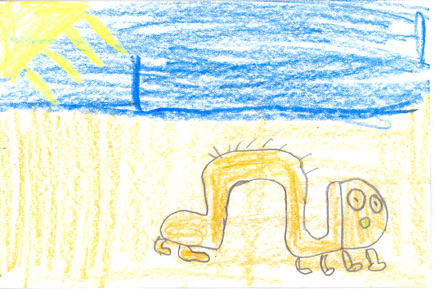 First the caterpillar came out of an egg. The little caterpillar was hungry so he ate through one apple but he was still hungry. So he ate two pears, then he ate three plums but he was still hungry. He felt sick because he was hungry so he ate through a leaf, then he felt better. Then he was so fat that he built a cocoon. He was in the cocoon for more than two weeks. Then he came out of the cocoon and he turned in to a beautiful butterfly that is symmetrical.

I liked this book because it was funny that the caterpillar kept on eating and eating. My favorite part is when he ate through an apple because I love apples. I like the pictures because they help tell what the story is about. I like the colors because all the colors in the book are my favorite colors like green, blue, red and brown. I really liked the part when the caterpillar builds his cocoon because he stays inside for more than 2 weeks. I liked the butterfly better than the caterpillar because it has symmetrical sides and beautiful designs and colors. I liked the book because the author wrote a lot of details like telling what caterpillars do and what they do in the cocoon.