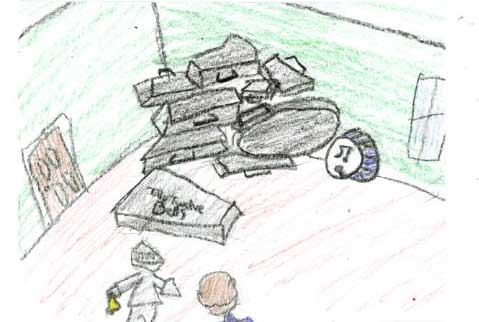 Just when Charlie Bone thought his life couldn't get any worse, his mean aunts come and realize he is endowed with a special power and force him to go to Bloor's Academy. What could his endowment possibly be? Of course, the strangest thing of all is being able to know what people are thinking in pictures.

Charlie Bone's friend, Benjamin, is having a birthday and Charlie decides to make a card with his dog's picture on it. But of course, nothing in Charlie's life works, so when he receives his picture he finds it was mixed up with one that was for Miss Ingledew. Charlie decides to return the photo and for his sensitivity, Miss Ingledew gives him a reward. For his reward, he receives an invention called the Tolly Twelve Bells that was made to un-hypnotize people. The reason for this reward was it was the last photo of her niece and it had been traded for something very invaluable and Emma had been hypnotized in sleep for many years. Charlie realized that saving Emma was up to him now. Can Charlie Bone succeed with this challenge, and help Miss Ingledew once more?

I thought the book was excellent, very exciting, and one of those books you just don't want to put down. I liked the book because it is very suspenseful and you'll never know what will happen next. My favorite part was when Charlie finally figured out how the Tolly Twelve Bells worked. I liked it because it made me feel happy to know that this book is very much like The Harry Potter series because it is about an ordinary kid who finds out that he has a special endowment and has to leave school and go to a special magical place. Also, it is similar because both Harry Potter and Charlie Bone were told their dads were killed in car crashes, but it wasn't true.

I would definitely recommend this book because it is a book you would give up your recess to read. I would recommend it for grades five and six. The suspense is more than enough to keep the reader's interest.

Sean F.
is a student in
Mrs. Salewski's 5th and 6th Grade Class