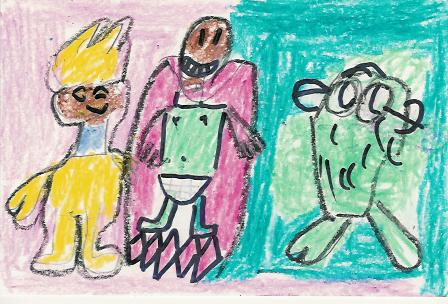 In school, Melvin turns his hamster into a bionic hamster using his Combine-O-Tron 200. The Combine-O-Tron 2000 switches peoples' brains. Later, at school, two boys make a comic about Melvin, who is a tattle tale. Melvin gets so mad he goes home and turns himself into Bionic Booger Boy using the Combine-O-Tron 2000. He looks at people and people say, "Ugh, that looks nasty!" and Melvin says, "What? What is ugh?" and he wipes off some boogers. If you want to know how the super hero Captain Underpants saves Melvin from being Bionic Booger Boy forever, read book series number two!

I really think it is funny when the Combine-O-Tron 2000 turns Melvin into Bionic Booger Boy. He has really big boogers and he likes them! It is really hilarious that Captain Underpants wears just his underwear. I think if you ever read this book you will like it because it is funny!

I recommend this book to my friend Joshua because he'll think it is funny. He is 9 years old.

Nazrul C.
is a student in
Page Turners After School Program / Rauschenbusch Center