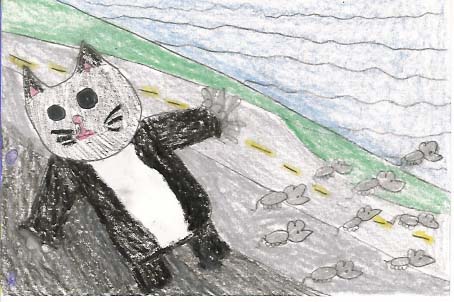 Cat Kong, by Dav Pilkey, is a great book. In the beginning of the story, there were 40 mice who went on a hunt. They found a large can of tuna fish. It belonged to the cat. The 40 mice saw the big cat meow really loud. The cat started chasing them. The mice trapped the cat, but it escaped. The cat started chasing the mice again. Read this story to find out if the cat will eat the mice.

I loved reading this book. It was funny. I laughed when the 40 mice dressed up as pirates and went on a hunt. In addition, the story has a lot of action. The cat was running really fast. The pictures really made the book fun to read. The cat looked like he was going to jump out of the book. Finally, I enjoyed reading this book because it has great pictures, it's funny and it has lots of action.

I recommend this book to kids of all ages. It is fiction, so no one should be scared of a giant cat. It's not too long and not too short. It's perfect for reading when you're on a car ride. Don't forget to read more books by Dav Pilkey.