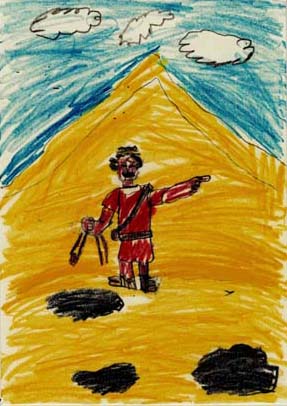 In the beginning, there was a giant in the land. God's army was scared. Goliath the giant shouted and came out to fight. If you win, you will be free. David said, "I want to fight Goliath." David chose five round smooth stones. He took one stone and with God's help and trust, aim the stone flew and Goliath died.

My favorite part of the story is when David put on the armor and it was too heavy and he fell over. David is my favorite character because he kills the mean giant. It relates to my life because if someone is bigger than you doesn't mean they are better than you. The pictures help tell the story.

I think others should read the book because it is about God.