Hank, the Cowdog: The Case of the Hooking Bull

Hank, the Cowdog: The Case of the Hooking Bull 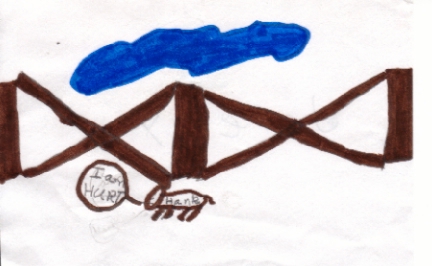 Hank and Dover, two dogs, take a ride in a spaceship even though they know it is the washer and dryer. Alfred tricked them to go in there. Then he pushed the button and they went around and around and around. They made it seem like the spaceship will episode. Another time, they are sitting by the couch. They see a monster. They are some weird dogs because the monster was really the couch. Then up in the north pasture there was a horrible, hairy, hooking bull. Slim, an older boy, thought he could rope it, but he could not. The bull ran away and it ran at him. Slim got hurt and so did Hank. Dover, the other dog, hurt his leg. They left Hank out there because they could not get him in the truck. Hank was very hot. He went in the stock tank. He was going to get a drink of water but he fell in. So he took a swim. The water made him heavier and he could not get out. Then some birds came. They wanted to eat him. They did not eat him. Instead they argued with each other. Coyotes were out looking for him. If you want to find out what happens to Hank read the book.

My favorite part is when the birds argued. I like it because they get mad at each other. They also sang about each other. I found Hank interesting because he could fight a bull. The book reminds me of when I got ran over by a heifer. I felt scared and weird and I broke my collarbone.