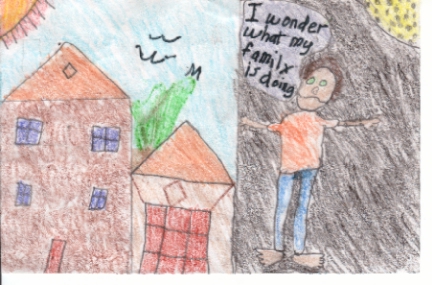 Daniel was enjoying a boat ride, when the boat sank. He ended up at an unknown island. He had to eat seal to stay alive. He only got a little water because the salt water was not good. When it would rain he would cup it with his hands. He made a house out of seal skin and logs. The seal skin made a good roof. The water would drip off of the roof. He also made a look out tower. When he was sitting on a rock looking out at sea, a penguin came along. Daniel called him Penny because he was lucky. Sometimes he would dream of home and his girlfriend, Susan. If you want to find out if he got off the island, read the book.

My favorite part is when Daniel gets his friend, Penny. Penny is his only friend. He had her for five years. Penny went away for a month or two. Daniel was so disappointed. I like when he goes looking for seals. Daniel changed because he only weighed 90 pounds at the end of the book. This was because there was no food for him to eat. I found this book interesting because I tried to imagine being Daniel and see what I would do differently. I loved thinking I was Daniel.

I recommend this book for others because it is a good imagination book. A reader that likes exploring would love this book. They will think it is interesting when Daniel builds a tower. Another reason I like this book is because based on a true story. If you are like me and like real adventure stories, you will enjoy this book.