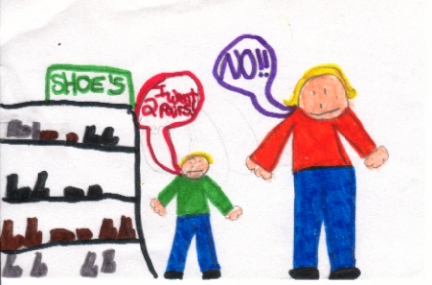 The Hatchers family, Peter, Fudge, Mom, Dad, Tootsie, Uncle Feather, and their dog Turtle have many adventures in this story. At the beginning they go look for shoes. Fudge thinks he needs two pairs of the same shoes. Mom says no, and Fudge doesn't like it. They go on a subway and he loses his shoe. Peter asked Fudge where his other shoe was, and he said, "I don't know." Then they tell the police to see if they could look for his shoe, but the police said that they most likely wouldn't be able to find it especially in the big city that they were traveling in.So they didn't look for it . Fudge got very upset.

One chapter is about when their long lost friends come for a visit. That family is the Howies: Eudora, Mini Farley, Flora, Fauna, and Uncle Howie. When Fudge finds out that their brother's real name is Farley Drexal Hatcher he gets really upset, because he doesn't want anybody to have the same name as his. Peter also hates it because they are staying in his apartment for a whole week. Their mom can't handle Flora and Fauna taking over her kitchen. When Peter's mom watches Mini Fudge, he lets Uncle Feather out of his cage. When Peter finds out he gets really upset. After awhile they catch Uncle Feather. Then Peter decides to forgive them because he knows that he couldn't do anything about it. But he was still kind of mad.

Then Flora and Fauna go to Peter's school. Everyone thinks they are cool, but Peter doesn't. But then after a long time he begins to like them, and wishes they could stay. They have to leave. Fauna and Flora are sad because they like Peter. Even Peter doesn't want them to leave. Then Flora and Fauna asked if they could come back next year. Uncle Howie said that they would think about it . The girls were very excited.

My favorite characters were Fudge and Uncle Feather. I liked them because I thought they were funny. I liked Fudge because he made the story interesting by putting up a fight in the shoe store. Another thing I like is he doesn't like his brother always telling him what to do . I like Uncle Feather because he usually repeated what Fudge said, but not Peter. Often he would say mean stuff to Peter.

Fudge sometimes reminds me of my cousins and how they usually act or fight. They also don't like to be told "No." He never wants to leave places. This book is only one of the Judy Blume books. If you like this book I think you will probably like the other books in this series. This book has some of the same characters that are in the other books.

If you are a person that likes funny or interesting books, I think you will like this book. The part of the story I think will interest you the most is the plot. That is how they get along with their long lost relatives from Hawaii.

Kelli B
is a student in
Sr. Janet's 4th Grade Class