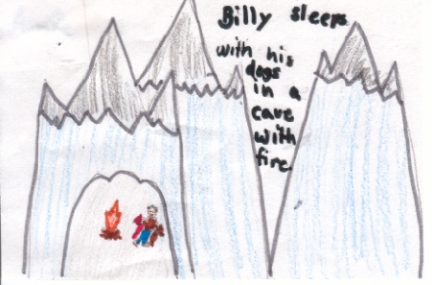 Billy was 14 years old and wanted a dog very badly. His family was poor and dogs cost money. So he worked for the money. It took him two years. He went to his grandpa's store and asked his grandpa to order the dogs. Billy was scared that his parents wouldn't let him buy the dogs, so he didn't tell them. After his grandpa ordered the dogs, Billy told his grandpa that his parents didn't know about the dogs. He lived in Illinois and had to walk to Kentucky to get the dogs. On his way back he had to stop in a cave in one of the Ozark Mountains because it was getting dark. He didn't want to run into a wild animal. So he built a fire and tried to go to sleep. He heard something. It was a mountain lion. Then he remembered that his dad said mountain lions are afraid of fire. He rebuilt the fire. The next morning he had some breakfast and went home. When he got home his parents knew about the dogs because his grandpa had told them.

One day he saw on a tree bark Old Dan and Little Ann. Billy thinks they are perfect names for the dogs. So he names his dogs Old Dan for the boy and Little Ann for the girl. After Billy catches a coon in a trap he trains his dogs. Now they go hunting every night. One night Billy and his dogs go hunting and the dogs treed a coon. Billy stayed there and had to cut down a sycamore tree to get the coon. He was so hungry and tired he couldn't chop anymore. He went home and slept.After breakfast the next morning he went back and after a while he got the tree cut down. One day his grandpa told him he had entered Billy in a coon hunt. Billy was to hunt on the fourth night. His dad asked him witch dog he wants to enter in the beauty contest. He looked at Old Dan. He was covered in cuts and scars from the fights he had. Little Ann didn't have any so he entered her in the contest. He won the silver cup! When it is their turn to hunt, it started to snow and sleet. It was very cold. Everybody stoped hunting except Billy his dad, grandpa, and the judge. That night they caught some coons. When they got home Billy gave the silver cup to his sisters. A few days later Billy and his dogs whent hunting one last time before it got to cold. If you want to find out what happens, and where the red fern grows, read the book yourself.

I think this book is a happy but also a sad book. It is really interesting and that's what makes you want to read it. I think it was sad when a boy named Rubin tripped with an ax and it went into his stomach. I think the book is really special because it's about the olden days and tells what it was like then. This book made me feel good after I read it because it was a long book with a lot of things happening in it.

I recommend this book for people who like dogs and adventure. If you like sad books this is also one of them. The end is really sad. The book is also very interesting and it makes you want to find out what is going to happen next.