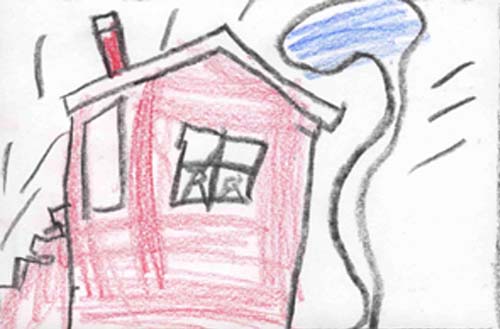 The mom went out shopping and they didn?t have anything to do because it was raining. They just sat and looked out the window. And then they heard the door ?Bump? and it was the Cat in the Hat. And then the Cat said he would show them some tricks. Then he took the fish and umbrella, the boat, the ship, the toy and a cup and he fell. Then he said he was going to show them another trick. Then he brought them a red box. Then Thing 1 and Thing 2 were in the box. They came out of the red box and they ran and took the kites and were messing up the room. The fish said ?no? and you should make them stop because they were going to ruin everything. Then the fish saw the mother coming home. Then he said they had to think of something. He took a big long net and caught Thing 1 and Thing 2. Then the Cat in the Hat was sad because he wanted them to have fun but they didn?t have fun. He went away with Thing 1 and Thing 2. He came back with a red car to clean the house. He said he always cleans up his mess with this car. Then the mother came in with a red jacket on. The mother asked what they did for fun. And then the book asks if you would tell your mother or not. And I would say ?Yes?.