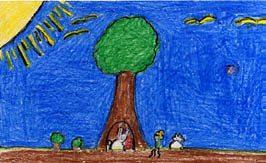 I really liked bunny rabbits, so I liked this book. My favorite part was when the bunny rabbit wanted to be a rock because I wonder why he would want to be something else if he was already a bunny? This story makes me wonder why my brother is allergic to rabbits.

SL
is a student in
Mrs. Magos' 1st Grade Class