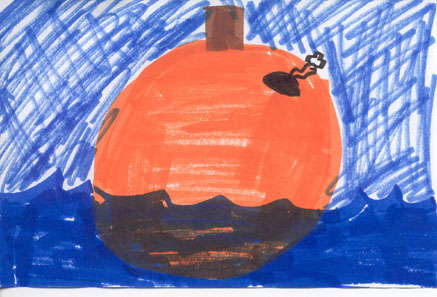 James' parents got killed when he was a young boy. James had to go live with his two mean aunts. Their names were Aunt Sponge and Aunt Spiker. They were so mean to him that they would hit him and not feed him. They would never let play with other kids and would make him do all the house work. One day James was in the garden and got these magical little beans from a little man. He dropped them on the ground by a peach tree and they sank into the dirt. The next day the peach on the tree grew big. James climbed into the peach and found large bugs in there. He saw a earth worm, grasshopper, spider, centipede, and other insects. The peach was so heavy that it fell off the tree and began to roll. That is when the adventure begins. You will need to read this book to find out what happens.

I think that it is an interesting book because I like the trouble that James and the other insects get into and how they get out of it. I think that it's really neat to see that James finally got friends after being so lonely for such a long time.

I recommend this book to anyone who wants to read an adventure book. Children of all ages will love this book because it is a great story about friendship. It also had a great ending, but you will need to read it to find out.