Katy and the Big Snow

Katy and the Big Snow 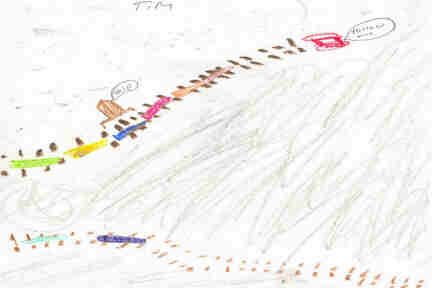 Katy and the Big Snow is about a steam engine that plows out the roads. In the summer she wears her bulldozer, and in the winter she wears a snow plow. One summer she pulls a steamroller out of a pond. One day in winter it starts to snow. The snow gets so deep that the entire city closes down. The railroad, the fire department, the police, the water department, the electricity department, the factory, the school, the post office, and the airport are all snowed in. Katy never stops until she has plowed out all the roads and everything has returned to normal.

I really like the illustrations in Katy and the Big Snow. They don't have a lot of color, but they show Katy in action. The city is shown like a map, and Katy moves through it digging everything out.

I like all of the books I have read by Virginia Lee Burton. They are Katy and the Big Snow, Choo Choo, Mike Mulligan and His Steam Shovel, and The Little House. i especially like how something like a plow, a train, a steam shovel or a house comes to life and doesn't give up even when things become difficult. Katy plows and plows even when the whole city shuts down. She is the only plow that doesn't get stuck. She is a hero. Mary Ann, Mike Mulligan's steam shovel, digs the hole for the new town hall. When she cannot get out of the hole, she becomes the new hall's furnace.

In my life this reminds me that if I keep working on something, even if it seems really hard, the end result will be good. I might not be a hero like Katy, but inside I will still be Tim.

I recommend Katy and the Big Snow to anyone who likes plows, trains, steam shovels or other big machines. You feel like you are right there with Katy when she plows through the city in the illustrations. Even if you are not a fan of big machines, I think you will like how she comes alive and becomes a hero.

Tim B.
is a student in
Mrs. Zimmerman's 2nd Grade Class