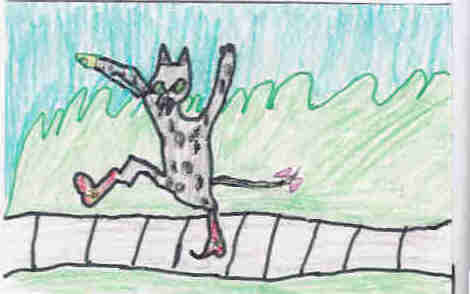 This book is about a boy named Chester. He has his own way of doing things, like double-knotting his laces and cutting his toast diagonally. Chester?s best friend, Wilson, does the same thing as Chester. Later in the book, a girl named Lilly has her own way of doing things, like talking backwards and putting on band-aids all over herself to look tough. Chester and Wilson were practicing hand signals on their bikes; suddenly two big boys surrounded them. Chester and Wilson were about to give up hope when a furious looking cat jumped out of the bushes and scared the two big boys away. The furious looking cat took off the mask and it was?LILLY! That day Chester and Wilson learned a lesson and it was that it doesn?t matter if your friend acts different than you, you can still be friends with them.

My favorite part is when Lilly gets a furious looking cat costume and scares the two big boys so bad that they run all the way home. I like Lilly because Lilly thinks she is so brave, but she is really a little brave. The writer uses descriptive words like ?a furious looking cat with horrible fangs jumped out of the bushes.?

I recommend this book to people who like books by Kevin Henkes. I think you should read this book because it has lots of descriptive words and the pictures show the feelings of the characters.