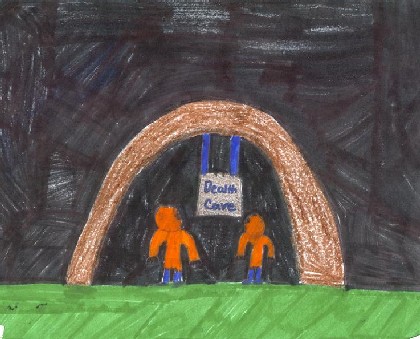 Two boys, Gary and Brian, were trapped in a death cave, and they could not get out. They searched for a way to escape. Will they ever get out or not? Read the story to find out.

There is a big lesson I learned from Trapped in Death Cave. The lesson I learned was that when someone gets trapped in an area you are not familiar with, don't try to save them on your own because you could end up just like them, in big trouble!

I think this book is the best novel I have read, because when I read this book I got excited when they were trying to find their way out. My favorite part was when they fell in the black hole because it was such a surprise and was so unexpected.

I thought Gary was my favorite character because he was scared to go into the cave and I can relate to people who get scared easily. Gary changed because in the beginning of the story he was not scared as easily as he was at the end because of what he experienced. You will have to read what he experienced to find out!

There were two illustrations. One of them was of Brian and Gary going into a sewer, and the other was them going into Death Cave. It was very suspenseful because we didn't know if they were going to get out of the cave or not.

It reminded me of when my dad and I were lost in Dallas, so we had to search to find our way home and we finally made it back to where we were supposed to be.

I recommend this book because when we first started reading it, not very many kids were interested, but by the end of the story, we were all hooked!