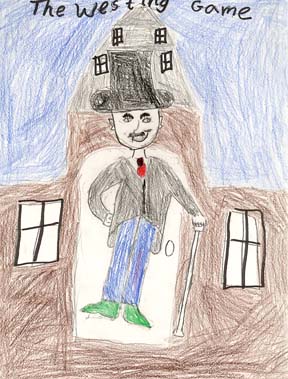 The Westing Game is about a wealthy man named Mr. Westing, who owns the town of Westingtown. In particular, he owns an apartment building that is the center of the story. When the story begins, Mr. Westing is living on a tropical island. When he returns to town, he is murdered in his mansion. After his murder, all of the tenants of the apartment-building gather to read his will. To their surprise, the will turns out to be a contest. The contest challenges them to figure out which one of the tenants murdered Mr. Westing. Mr. Westing knew that he was going to be murdered by one of his tenants. Whoever finds out who murdered him will get 200 million dollars. They will do anything to win the money! It is interesting to read that people will lie, cheat and steal to win the money.

This book was really fun to read, because there was one little turn after another. It was suspenseful. I also liked that the beginning got right to the point and wasn?t too slow. I like Mr. Westing, because he was really smart to predict what would happen in the future and turn it into a game. I also liked Mr. Shin Hoo who owns a Chinese restaurant in the building, because he is very mysterious. I have never read a book like this. When I read The Westing Game, I was so excited to see what was going to happen next I did not want to put it down.

I recommend this book to people who like suspense. I wish the author would describe some of her characters more. She describes Mr. Shin Hoo very well, but I wish I knew more about Turtle, a girl in the book. If you are wondering who murdered Mr. Westing, then you?ll have to read the book to find out!