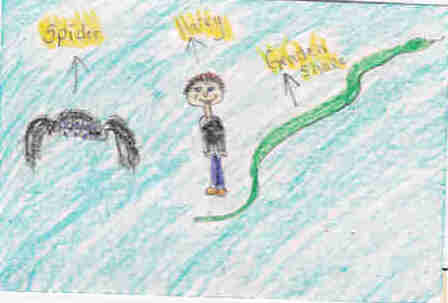 This book is about a boy named Harry. He does horrible things like bring spiders, snakes, and other gross stuff to school. When Harry and his best friend Doug walk in the school, many things change, like the floor they were on. I'll let you read the rest.

I think this book is awesome because it was horrible and funny at the same time. Harry put a snake in Song Lee's face and Doug was too chicken to do it. I liked Harry the best because he was always brave enough to do things. He stole a hotdog from Sidney just to be mean. Even though that was not the right thing to do, he was brave enough to do it. I also thought Harry acted like my sister because she can be gross and brings bugs into the house. I can be that way, too.

Alex O.
is a student in
Ms. Breckenridge's 3rd and 4th Grade Classes