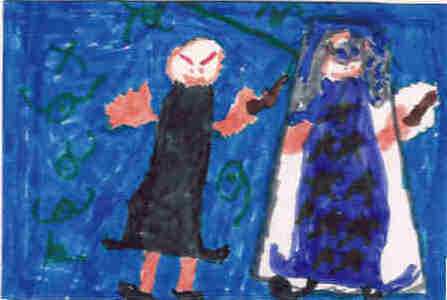 The big idea is that Harry Potter is going back to school. Harry has been having nightmares. To make things worse, two Dementors come and try to suck out Harry's soul! When Harry uses underage magic, the ministry of magic gives Harry a trial to see if he gets to go back to Hogwarts, or goes to Azkaban. To find out what happens, read this book.

I like this book. I like it because it's fantasy genre. I found Harry interesting because he's magic and I like to read about magic people. One of my favorite parts is when Harry sees into the mind of Voldmort's snake; she's attacking Mr. Weasly. I like this part because I like it when people see into other people's minds. I made a connection with Harry because we both were nobodies once, but it turned out that we were somebodies.

If you're a person who reads short books, then don't pick this book up! Some of the magical things include: alive statues, a prophecy, magic wands, witches and wizards, and an evil sorcerer. I hope you find this book as interesting as I did.

Hunter A.
is a student in
Ms. Breckenridge's 3rd and 4th Grade Classes