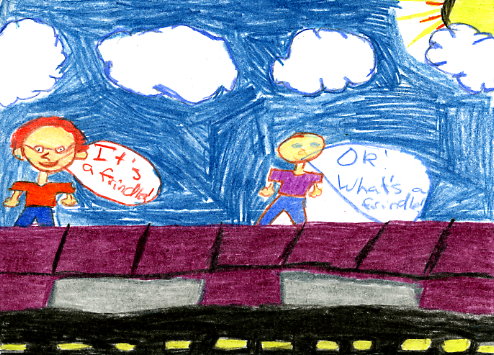 Did you know frindle means pen? This book is mainly about a boy who finds a pen and calls it Frindle. The boy's name is Nick. Nick found a pen and started calling it Frindle, but his teacher said, "Quit. It's not a real word because it's not in my dictionary!" So Nick looked it up in her dictionary, and it was in there. The word frindle causes chaos at the school. The best part of this book is the ending. You'll have to read the book to discover why it's the BEST part! I think that a lesson learned was, don't always think you know everything. There is always more to be learned.

The one character that I liked was Nick because he is always daydreaming in class. He plots and plans against all his teachers. In an unusual way, I thought that his behavior was funny because some of his stunts were humorous. For instance, one of his favorite stunts was to raise his hand when the teacher was asking a question and exclaim, "I didn't do it!" Surprisingly enough, in each of my classes since kindergarten, there has always been a boy who enjoyed practical jokes. Nick reminds me of this boy because he always keeps class interesting.

This is a BOY book. I'd recommend this book to boys because I think boys would relate to Nick's practical jokes.