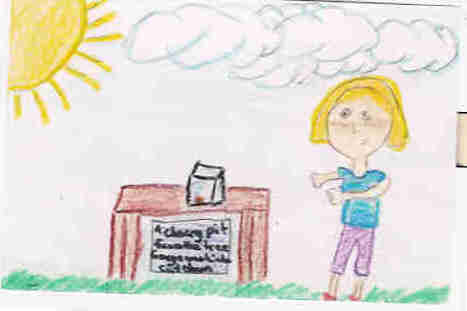 Judy was eating a cherry when she got an idea. She put the cherry pit from her cherry in a glass case and tried to pass it off as a cherry pit from the tree George Washington cut down. Judy Moody tried everything to get famous because her worst enemy won a spelling bee and became popular so Judy wanted to get famous and become popular, also. If you want to find out if Judy got famous or not read this book.

My favorite part of the story was when Judy took the cherry pit and told people it was a pit from the tree George Washington cut down. I liked that part because people believed her. It was funny because of the things Judy did with George Washington's cherry pit, which was really Judy Moody's cherry pit. Judy Moody reminded me of myself because I always hate it when people get famous, and then I want to get famous too. This book is part of a series but the books in it are really different because she has a different personality in each book. This book was also really realistic because lots of people want to be famous and would try some of the things she did to get famous.

I recommend this book to people who want to be noticed because it's got some great ideas on how to become well known in it that I'm sure if you tried a few might just work.

Alexandra T.
is a student in
Ms. Breckenridge's 3rd and 4th Grade Classes