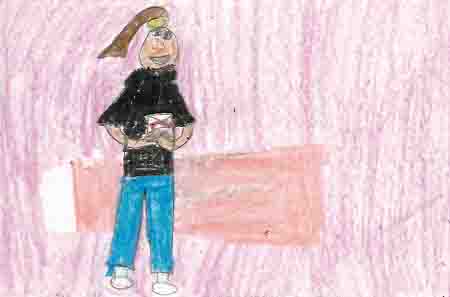 Kristy?s Mystery Admirer is about a girl named Kristy who gets mystery notes. One day Kristy?s friend, Shannon, came over because she accidentally got a note that belonged to Kristy. Kristy?s notes started out nice, but then started getting freaky. Kristy thinks that Bart is sending her the notes. Bart is her softball coach. She thinks Bart is her mystery admirer because she likes him. In the end, Kristy finds out who her mystery admirer is. If you want to know who her admirer is, read this book!

I enjoyed reading this book because it was funny. A funny part was when Shannon got hit in the head with a baseball. Another example was when she thought she was going to a dance with a crazy lunatic. This book was also disgusting because Kristy got fingernails in one of her letters. My favorite part was when Kristy got scared because it had suspense. I wanted to know what was going to happen next. That part was cool because she thought she was getting letters again and funny because she got scared. I felt excited while reading this book because it was awesome. I liked that she got lots of notes. It was exciting to find out what would happen next.