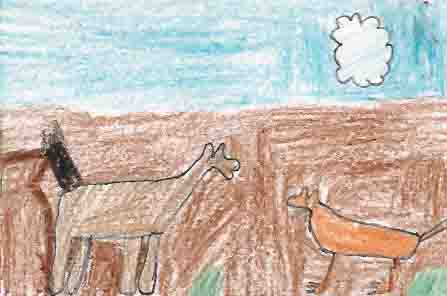 Bad things happen to Hank. First, Sally May made an egg for Pete, the barn cat. Hank wanted it so bad and tried to steal it. Sally May saw him and hit him on the nose with a wooden spoon. Then, Sally May tripped over Hank and was going to murder him. At the end, Hank got into a big fight with the one-eyed killer stud horse. To find out if Hank lives, read Hank The Cowdog - The Case of The one Eyed Killer Stud Horse.

I enjoyed reading this book because of the characters. They were interesting. Also, it was funny because of Hank?s pal, Drover. The details were awesome, too. Even though there were no pictures, I saw the characters in my head. My favorite part was when Hank got hit on the nose with a wooden spoon. That part was really funny. It was sad, too. I was happy that he got hit, but lived. Hank was an interesting character. He was brave because he got into a big fight with a horse. He was funny. He made me laugh. He is smart because he knows what he is doing.