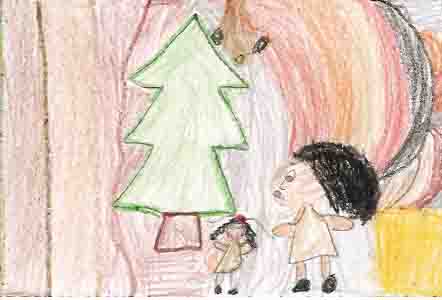 Josefina is a nine-year old girl who has three sisters named Ana, Francisca, and Clara. Their mom died. Before she died, their mom had made a doll and named it Nina. The girls had a tradition that on Christmas, when each sister turned nine, they would get Nina. It was Josefina?s turn to get Nina, but the doll got lost. Read this book to find out if Josefina?s Christmas is ruined.

I enjoyed reading this book. It was exciting when Josefina got into a play. It was also sad because her mom died and Nina, her doll, got lost. But it did have a happy ending. Josefina was an interesting character in the book. She was brave because she had the courage to be in the play. Also, she was caring because she comforted her sister. She was also crafty because she sewed flowers into a cloth for the alter. I felt unhappy as I read this book because her mom had died. It was sad for me because it happened on Josefina's favorite holiday which was Christmas. Also, I felt bad when it was Josefina?s turn to get Nina and the doll was lost. Another sad event was how mom?s alter cloth got ruined because it was piled on top of a lot of things in the attic.