On the Field with Emmitt Smith

On the Field with Emmitt Smith 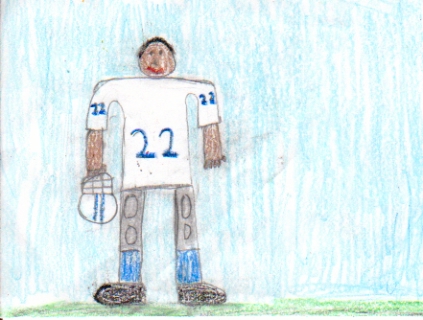 Emmitt Smith did what people thought was impossible. When he was getting older, he liked to play football. Emmitt wanted to get some kids and make a team. So Emmitt's Grandpa called some schools and asked them if they could make some teams. They made the teams. That year about every school had a team. When he was in college he played for the Gators and Florida State. He was a runningback. He always pictured where the gap was when they gave him the football. That made it harder for him to be tackled. After college football, Pro teams were picking players to be on their teams. Somebody called Emmitt. You will have to read this book to find out what happens next.

My favorite part is when Emmitt climbs out of his bed at the age of 9 months. I don't know how he could do that. He reminds me of Marshall Faulk because he can run fast. He is a good runningback. Emmitt and Marshall are alike in some ways. This book helps alot when practicing and playing football because it explains some of the plays.

I recommend this book to people who like football. This book gives examples of good football playing. You can see the game through the eyes of Emmitt Smith, a great player. This book is mostly for anyone who love sports.