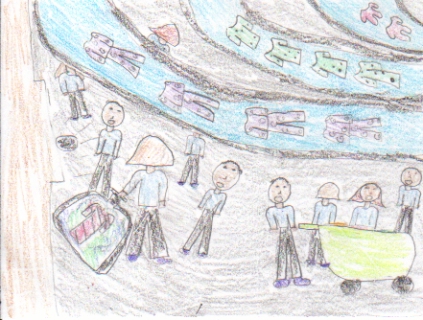 It was a long time since Hitler was defeated. You would think that the hatred and prejudice for Jews and Blacks would be a thing of the past. But one day someone throws a rock through Mr. Stern's pajama factory window. Why would someone do this? Could it be because his family is Jewish or because Mr. Stern is helping a Negro get a police job? Audrey Stern thinks it must be a sign, but for what and why? Meanwhile Audrey's Tante has been having dreams and they seem to be coming true! Tante had come from Auschwitz. Everyone thought that she was just having regular dreams, but they were really wrong! The Stern family is in danger. From rocks to fires, Audrey is wondering if it will ever stop. What can Audrey do?

I like this book because it talks about a family who deals with their problems. It also is funny and scary. Audrey's aunt, Tante changes. First she is grumpy, and at the end she isn't. My favorite part in this book is Audrey's dream because it is "out of this world". My favorite character is Audrey's little brother because he is funny and he cares about his family. If I could give a grade to this book, I would give it an A++!

I recommend this book to 9 year-olds and above. I don't think younger kids could handle the scariness or just trying to understand it. This book would be for you if you like sad and/or scary stories!